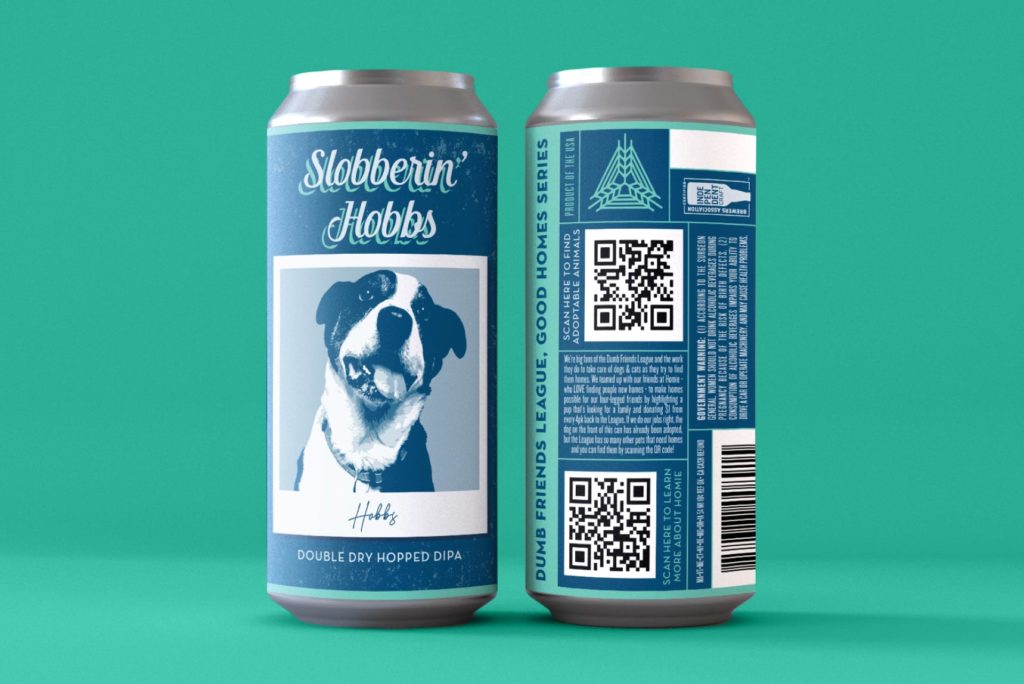 The Slobberin’ Hobbs brew is a double dry hopped IPA at 8% ABV. It will be sold in 4-pack cans at local Colorado retailers, and at the New Image taproom in Arvada.

Each can of this charitable brew features a current adoptable dog at Dumb Friends League. December’s release, Home For Pit-Mas featured a pitbull named Homey. February’s “All You Need Is Love – And Dogs” featured a pair of dogs. With both releases, the dogs quickly found forever-homes and the beers sold out!

Ready to adopt? You can adopt in person, by appointment or virtually by visiting the Dumb Friends League website.

The Dumb Friends League was founded over 100 years ago and has made a large impact on animal welfare in and around Denver. In addition to pet adoption, they provide free spay/neuter surgeries, help rehome abused and neglected equines, and prevent and investigate cases of animal neglect and mistreatment. If you are interested in donating, volunteering or adopting, please visit their website.

New Image Brewing is a small local brewery located in Olde Town Arvada, Colorado. They were founded in 2014 and specialize in seasonally inspired beers, craft cocktails, tapas-style food, and social dining. New Image Brewing is committed to partnering with local charities to spread awareness and help raise money for local charitable efforts. New Image Brewing will also be donating $1 per 4-pack of the Slobberin Hobbs beer sold. Check them out at their website or stop by the brewery at 5622 Yukon St. Arvada, CO.

Homie’s mission is to make homeownership easy, affordable, and accessible for all—and we think our four-legged friends deserve a home too! Homie understands that buying and selling a home in the current market can be stressful and expensive. That’s why we’ve combined technology and the expertise of local agents to streamline your home selling process. Finally, the way real estate should be.

Ready to buy or sell? You can browse homes or list in just a few minutes via the Homie website or call 720-513-7607 to learn more.